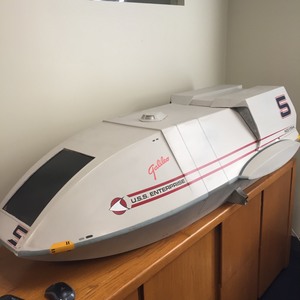 If you think Vice Admiral of StarFleet Command Kathryn Janeway is sexier than Princess Leia, you’re probably gearing up for First Contact Day on April 5, the fictitious holiday meaningful to Star Trek fans. AccuRadio has just the listening experience for boldly listening as you’ve never listened before, to music both soaring and brooding, majestic and mysterious, drawn from Star Trek’s five live-action TV series (to date) and its 12 original motion pictures.

For those not familiar with AccuRadio: As Earth’s fastest-growing webcaster 1, it’s been introducing listeners to new musical frontiers for over 15 years. Its 975 channels are curated not by algorithms or androids, but by humans. Accuradio’s interface is as easy to use as the LCARS interface in the second live-action TV series, Star Trek: The Next Generation. And the site’s gold-on-plum color scheme brings to mind the uniforms worn in The Next Generation and third series, Star Trek: Deep Space Nine.

For those not familiar with Star Trek’s holiday calendar: First Contact Day, according to an episode in the fourth series, Star Trek: Voyager, commemorates the first official contact between humans and Vulcans on April 5, 2063 in Bozeman, Montana. It marks a defining moment in human history, honoring the warp 1 flight of the Phoenix, and heralding the formation of the United Federation of Planets. (Festivities on board the Intrepid-class USS Voyager included listening to rock music; giving the open-palmed Vulcan salute; wishing one another “Live long and prosper;” and eating pierogis, the Polish dumplings also savored by present-day Chicagoans, including AccuRadio’s staff.)

The most obvious AccuRadio channel to kick off your First Contact Day expedition is Spock On: The Music of Star Trek, with gems like “Spock Walk,” “Beamed to the Farm,” “Battle for the Array.” About half of these tracks are the work of the great Jerry Goldsmith, who composed scores for five of the films, as well as themes for The Next Generation and Voyager.

Star Trek’s influence on AccuRadio runs deep. Founder and CEO Kurt Hanson probably knows more about Trek lore than that Andorian you met online playing Delta Rising. Hanson still remembers the first episode broadcast in 1966: “I was 11 years old, watching on a black and white Magnavox console TV. Then I started persuading my parents to take us to visit my aunt and uncle when Star Trek was on, because they had a color TV, and after the first two pilots the sets and costumes were designed to show off RCA color TVs.”

Just before launching AccuRadio, Hanson fulfilled a lifelong dream by getting a job as a graphic artist on Star Trek: Insurrection, the ninth film. This also gave him the opportunity to roam the sets of Deep Space Nine and Voyager, which were in production on the Paramount lot at the same time. Hanson designed the animations shown on the villainous aliens’ starships’ computer monitors. Then, once the millennium turned, Hanson was back in Chicago inventing AccuRadio.

And AccuRadio’s Chicago headquarters feature Hanson’s impressive collection of genuine memorabilia from Star Trek’s TV and film sets, which he acquired at the famous Christie’s Auction in 2006. Accuradio’s staff meets at an original-series-era conference table (rebuilt for the fifth live-action series, Star Trek: Enterprise), complete with transponder-like intercoms. Nearby are the 10-foot tall Promenade Mall directory and the Cardassian food replicator from the third series, Deep Space Nine. Of the various costumes he acquired, Hanson claims to have worn only two (in public anyway): the suede field jacket worn by Dr. McCoy in the climax of  the first film, Star Trek: The Motion Picture, and the Kirk-era, green, wrap-around  tunic worn by Captain Jonathan Archer on Enterprise. “It’s stressful to wear such a valuable and historic item to a Halloween party where someone could spill onion dip on it,” Hanson explains.